► Chapter 2: Things to Know Before Getting a Dachshund

► Chapter 4: Caring for Your Dachshund

In this chapter you will find a wealth of basic information about the Dachshund breed including facts about Dachshunds, insight into their temperament, tips for training, and a brief history of the breed. The information in this chapter is intended to introduce you to the breed so you can start forming an idea about whether or not a Dachshund would be a good pet for you and your family. In the next chapter you will receive practical information about keeping Dachshund dogs to help you further in making this difficult but important decision.

Even if you have never seen or interacted with a Dachshund in person, you probably already know what they look like. Sometimes called “wiener dogs,” Dachshunds are known for their long bodies and their short, stubby legs. Though they may not look like it, Dachshunds are actually talented hunting dogs – they were developed to scent and chase burrowing game like badgers, flushing them from their underground burrows so the hunter could shoot them. The miniature Dachshund breed was bred specifically for hunting small prey like rabbits.

Though they were originally developed for hunting, the Dachshund plays many roles today. In the U.S., the breed has been used to track wounded animals and they are also frequent participants in field trials, conformation shows, and other dog sports. According to American Kennel Club (AKC) registration statistics, the Dachshund is the 10th most popular breed in the United States. With dozens of different breeds accepted by the AKC, this is no small feat.

While all Dachshunds exhibit the characteristic long body and short legs, there are a number of breed differentiations in terms of size, coat and color. There are three different coat types seen in the Dachshund breed: smooth, longhaired, and wirehaired. The smooth coat variety is the shortest hair and it comes in an unlimited array of colors and patterns. The longhaired variety has a long, silky coat with ample feathering on the ears and legs. The wirehaired coat has a medium-length coat that is harsh and wiry in texture. This coat variety is the least common in the United States but it is very popular in various European countries, particularly in Germany.

In terms of color and pattern, Dachshunds vary greatly and there is no standard coloration. Many Dachshunds have a single base color of red or cream and many exhibit a pointed coloration of tan color points paired with another base color like black, brown, or blue. Tan color points appear as markings over the eyes, ears, paws, and tail. Other patterns that may occur in Dachshunds include merle, sable, piebald, and brindle. It is possible for a single litter of Dachshunds to exhibit a wide range of colors and patterns.

In addition to having long bodies, Dachshunds also have fairly long snouts. Their muzzles are long and somewhat tapered toward a dark nose and they have large, floppy ears that hang down on either side of their heads. The AKC prefers darker eye colors in Dachshunds, though a range from light brown or amber all the way to green is possible in this breed. It is also possible for Dachshunds to have two different colored eyes, though it is typically only seen in dapple pattern Dachshunds.

In terms of their size, Dachshunds do vary. There are three different sizes – standard, miniature, and kaninchen. The standard Dachshunds stands 8 to 9 inches tall and weighs 16 to 32 pounds at maturity while the miniature Dachshund stands 5 to 6 inches tall and weighs up to 11 pounds. The kaninchen variety is the smallest and its name comes from the German word for rabbit – this variety grows to a maximum size between 8 and 11 pounds.

When it comes to the temperament of the Dachshund breed, there is a great deal of variation. For the most part, Dachshunds are playful and lively companions – they form strong attachments with family and they can be protective in the presence of strangers. These dogs do have a tendency to bark and they can actually be very aggressive against strangers in some cases. According to a 2008 study conducted by the University of Pennsylvania, Dachshunds were rated by 6,000 dog owners as the most aggressive breed with 20% of them having bitten someone. Because these dogs are so small, the injuries caused by these attacks is not as severe as it would be with larger breeds but it is still important to consider.

With the aggressive tendencies of the breed being so clear, it is absolutely essential that you train and socialize your Dachshund from a very young age and maintain that kind of training throughout his life. Dachshunds are smart and generally very trainable, though they do have a tendency to develop a stubborn streak, as is common with small-breed dogs. Also common with smaller dogs, the Dachshund can be a little tricky to housebreak but most owners find that crate training methods are effective.

Aside from their potential to become aggressive with strangers, Dachshunds are generally loyal and affectionate with family. They are fairly active and do enjoy training for dog sports, though they really only need a moderate amount of exercise on a daily basis. Dachshunds may not be a good choice for children, though they can be okay when raised from a young age in the presence of children – the same is true for keeping Dachshunds with other dogs. In terms of their behavior around other pets, you should not be surprised if your Dachshund chases cats and other small animals due to their hunting background.

As a small-breed dog, the Dachshund has a very long lifespan averaging around 12 to 15 years. These dogs are unfortunately prone to a number of serious genetic health problems, particularly back problems. Intervertebral disk disease is common in Dachshunds, as are other musculoskeletal issues like patellar luxation. Many Dachshunds develop eye problems like progressive retinal atrophy, cataracts, or glaucoma and they are also prone to skin allergies and other skin conditions. It may surprise you to know that Dachshunds also have a high risk for gastric torsion, a condition more commonly seen in large and giant breeds – this is due to their deep-chested stature.

Pedigree: origins may be traced to ancient Egypt; modern breed developed from European hounds and terriers

Coat Texture: soft and short; long and silky with feathering on the ears and legs; medium-length, harsh and wiry

Color: many colors and patterns; base color of red or cream is common, often with tan color points; no standard color

Children: may not be a good choice for young children

Other Dogs: generally good with other dogs if properly trained and socialized; may bark at other dogs

Training: intelligent and trainable but can develop a stubborn streak; may be tricky to housebreak

The exact origins of the Dachshund breed are unknown, though there is some evidence to suggest that early ancestors of the breed may go all the way back to ancient Egypt. Discoveries have been made of engravings of short-legged hunting dogs and there is a recent discovery that was made by the American University in Cairo of a mummified Dachshund-like dog found in ancient Egyptian burial urns. The modern version of the breed, however, is the product of selective breeding by German breeders.

The breed currently known as the Dachshund was developed by German breeders and it includes different hereditary elements drawn from various French, German, and English hounds and terriers. Originally bred for hunting badgers, the Dachshund breed has been kept in royal courts all over Europe – even by Queen Victoria. The first historical reference to the breed that has been verified comes from books written during the early 18th century – these texts mention “badger dogs” named “Dachs Kriecher” (badger crawler) and Dachs Krieger (badger warrior).

Early Dachshunds in Germany were much larger than the modern version of the breed – they typically weighed between 30 and 40 pounds. These dogs were used for scenting and hunting a variety of smaller game, though they were also used for tracking wounded deer and hunting game as large as wild boars in packs. There are multiple theories regarding the development of the longhaired and wirehaired varieties, though most involve crossing the Dachshund with various terrier breeds as well as small spaniels and other dogs.

The Dachshund breed first appeared in the United States in 1870 when it was imported as a rabbit hunting breed. The first Dachshund was registered by the American Kennel Club in 1885 and the first breed club in America (the Dachshund Club of America) was formed in 1895. The popularity of the breed declined drastically during World War I but it was built back up over the following decades to become one of the top 10 breeds in the country today.

There is only one Dachshund breed, but there are many variations in terms of size and coat length. As you have already learned, there are three different sizes for the Dachshund breed – standard, miniature, and kaninchen. You also know that there are three different coat types – smooth, longhaired, and wirehaired. To give you a better understanding of the differences between these types of Dachshunds you will find some useful information in the following pages:

Dachshunds of this variety are the most common in the United States. These dogs have short, shiny coats that are smooth in texture and need very little grooming. Because their coats are so short, shedding may not be as noticeable as with other coat types, but it is still present. Also, because their coats are short, they may need an extra layer of protection against the cold in winter. For colorations, smooth coated Dachshunds are commonly seen in combinations of red, cream, black, and tan. There are also some patterns you might see like dapple, sable, brindle, or piebald. 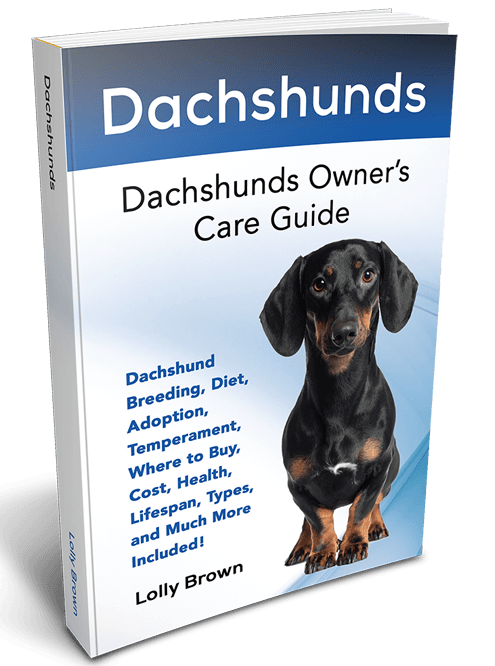