► Chapter 1: What Are Superfoods?

► Chapter 5: Can Animal Foods Be Super Too?

► Chapter 8: Does How I Cook My Food Matter?

► Chapter 9: Ideas for Using Your Superfoods

Chapter 1: What Are Superfoods?

“Super” foods aren’t “super-sized” like the not-so-healthy meals from a certain fast food chain. Instead, these are foods that deliver the greatest nutritional value to your body to maximize your health and to protect you against the effects of disease and aging.

The idea of using food as medicine is fundamental to all the world’s healing traditions, especially those in China, India, and Greece. Going even farther back to our hunter-gatherer ancestors, learning about medicinal herbs and beneficial plants was simply an aspect of survival that in time became refined to actual “prescribed” remedies.

Now the traditional connection between food and medicine is being “validated” by modern science for what it really is, a practical and natural way to manage health and to prevent illness rather than treat it after the fact. Rather than reacting after the fact, eating to maximize health is proactive, coast effective, and life enhancing.

Far from being a “discovery,” superfoods and sound dietary practices are being “re-discovered” in a time when far more people are eating “food-like” substances rather than real food and paying the price with poor health and high medical bills.

What Are Blue Zones?

As “proof of concept,” let’s look at the idea of the “Blue Zones.” This term grew out of the work of Gianni Pes and Michel Poulain who demographically proved that the Nuoro province of Sardinia was home to the world’s highest population of male centenarians.

When the researchers become more focused on the regions with the greatest longevity, they drew concentric blue circles on their maps. As a kind of shorthand, the men began to refer to the areas inside the circles as “Blue Zones,” a term now used to describe areas of the world where people live significantly longer lives, often in excess of 100 years. These regions include:

But it’s not just a matter of living longer, people inside the Blue Zones are also living better. In Icaria, Greece for instance, residents enjoy a 20% lower cancer rate, 50% less heart disease, and almost no dementia.

In trying to understand exactly what makes Blue Zones unique, six lifestyle characteristics stand out according to Dan Buettner, author of The Blue Zones: 9 Lessons for Living Longer From the People Who’ve Lived the Longest:

Beyond the benefits clearly derived from family and social engagement, these people are consuming diets that emphasize nutrient-dense “super” foods.

Simply put, foods that are nutrient dense have more essential nutrients by volume and fewer calories. Say, for instance, that you’re hungry after you’ve already had lunch and start looking for a snack about the middle of the afternoon. Your choices are an apple or a glazed donut.

Both are about the same size. The donut has approximately 200 calories and 1 gram of fiber. It tastes good and if there are more in the box, you may eat a second or a third before you’re full because a single donut won’t fill you up.

The apple has 80 calories and is packed with vitamins, phytochemicals, and 3.6-4.6 grams of fiber. Eat the apple and it will satisfy you until supper because its density equals that of three glazed donuts. Low calorie foods with high nutrient density are clearly good for weight loss and maintenance, and most of them also qualify as “superfoods” for a host of other reasons.

You’ll see many items on short and long lists of superfoods. As a general rule of thumb, when you’re shopping, stay on the edges of the store where you’ll find produce, lean meats, and low fat dairy items. That’s superfood territory.

The middle regions of the grocery store are the land of processed, packaged foods that may or may not be good for you, a determination you can’t make without a PhD in label reading. Even then, there’s no guarantee of full disclosure in regard to ingredients.

But once you learn which foods you like that are also nutrient dense superfoods, your choices become much simpler and the guess work is eliminated.

The bottom line is this. What you eat affects your health. You can good make choices that maximize nutrition. In doing so you support weight loss and the chance for a longer life free of cardiovascular disease, cancer, diabetes, and cognitive impairment from aging. Let’s single out cancer to further explore these assertions.

According to the American Cancer Society and the American Institute for Cancer Research, eating right, exercising more, and not smoking can eliminate more than 50 percent of cancers. By making better lifestyle choices, more than half of the cancer diagnoses made every year can just go away!

This staggering effect comes from a diet that emphasizes fruits, vegetables, and healthy meat like fish. These foods introduce essential fiber while lowering inflammation in the body. They contain antioxidants and nutrients that eliminate the activity of free radicals and the tissue damage they cause.

Various population studies point to the importance of raising levels of Vitamins A, B, C, E, D, and certain types of carotenoids to lower the risk of cancer – elements delivered by these fruits and vegetables.

Clearly, understanding the specific nutritional mechanism associated with plant-based foods is essential in making your selections. That information does not stop at vitamins and minerals, however. Biologically active compounds called phytonutrients are also important for their role in protecting the body against many forms of disease, not just cancer.

Although many people are unwilling to admit it, obesity is a disease and one that has reached epidemic levels in the United States. Since the 1970s, obesity rates for adults and children have more than doubled, giving birth to a burgeoning diet industry.

Retail bookshelves are packed with books recommending this or that eating plan or describing surgeries that remove part of the intestines to reduce how much a person can consume.

Would someone really consider weight loss methods that drastic? Yes, amazingly they would. Some people are so resistant to eating a plant-based diet they’d rather opt for surgery or spend thousands of dollars on diet pills and medications to manage their illnesses – all stemming from obesity.

These choices are also driven by the medical and pharmaceutical industries whose job it is to convince people to undergo procedures or buy their products. Since there’s no big money in broccoli, you can see where the advertising dollars are spent.

A change to a mostly plant-based diet, comprised primarily of the superfoods listed in this book, will actually allow you to eat as much as you like without concern for calories.

Your weight loss will happen because of the foods you are eating, not due to any extreme diet fads or calorie counting. Being thin does not necessarily mean that you are healthy. Eating a predominantly plant-based diet will ensure that you are healthy as well as the correct weight.

Most of us assume we’ll grow old and die. Of course we all realize that we will die eventually, but the more likely truth is that you will grow old and live. Life expectancy is rising, which is a good thing, but it also means that disease and illness are almost certain to be a part of your future – unless you do something to change the odds. The quality of your life as you age should be of the utmost importance to you and something you actively work to improve on all levels.

While it is true that adding superfoods to your diet will return health benefits, exercise is equally important. People who live longer all incorporate physical activity into their lifestyle as a daily habit.

Exercise not only improves your physical well-being, it also boosts brain function regardless of age or fitness level and delivers a range of unexpected benefits: 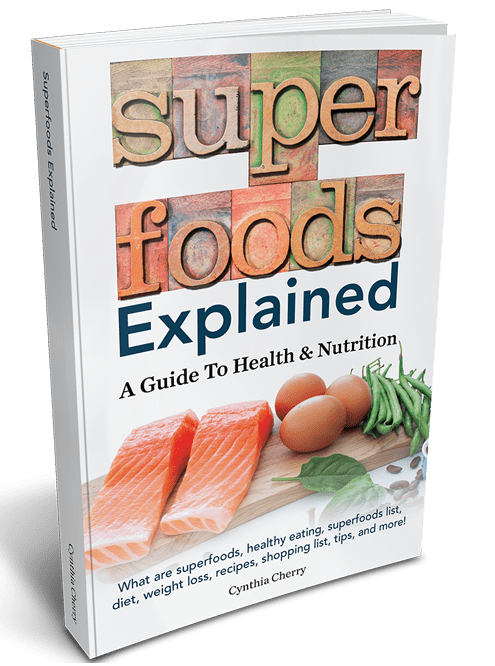