► Chapter 6: Grooming and Training Your Rottweilers

Rottweilers are not just known for having a robust body structure, they are as well remarkable for being a courageous, confident, and loyal type of companion but it may not be the best choice for everyone. Before putting into conclusion whether or not this breed might be right for you and your family, you must first make yourself familiar with this dog breed. You have to gather round sufficient information, and devote your time and effort in able to know this dog breed.

It is believed that Rottweilers originally came from Germany where they are known as Rottweiler Metzgerhund which means Rottweil butchers’ dogs as they assist in herding livestock and pulling carts filled with butchered meat all the way to the market. They are also a part of Roman cattle dogs which had escorted the herds behind the wake of Roman armies.

In 74 AD, the 11th Legion of the Roman Empire set camp in Wurtemberg, Germany by the bank of the river Neckar. Years passed, the area became a little town filled with small villas roofed by red tiles. It became known as das Rote Wil – ‘rot’ originating from the red roof tiles and ‘wil’ from the villa. From then on, the city full of red-roofed Roman villas was eventually called ‘Rottweil.’

At some point in the Middle Ages, Rottweilers were exploited to hunt for wild bears and subsequently given the responsibility to control cattle. They have to watch the herd at night to preclude any cattle from straying, to lead the herd as they go long distances by day, and to protect the crusade against possible predators like dangerous bulls. Rottweilers were bred to be resilient and robust, parallel to the breed known today.

In the year 1899, the International Club for Leonbergers and Rottweiler Dogs was established in Germany. This club has set the first breed standard for the Rottweiler in 1901.

With the advancement of the area during the 19th century, railways came and cattle herding was prohibited by law. The Rottweilers were then left with no occupation. And so, the butchers had them as draughts dogs, pulling little carts filled with meat. They became known as Rottweii Butcher’s Dog, as mentioned earlier, that later shortened to Rottweiler.

In 1907, a club dedicated to safeguarding the well-being of the breed started planned breeding and put up other efforts to improve the appearance and to preserve the working qualities of the breed. Another Rottweiler governing body, The Allgemeiner Deutscher Rottweiler Klub or ADRK, was established in the year 1922.

They have a large and broad head and defined athletic, muscular body. Their chest is deep reaching the level of their elbows and their back is straight. They have small triangular ears that lie flat to the head and a wide black nose. They own a deep set of almond-shaped dark brown eyes. Their nails are black in color. They are covered with smooth and glossy black coat, medium in length, coarse to the touch, with a hint of tan markings on the chest, legs, cheeks, and muzzle. 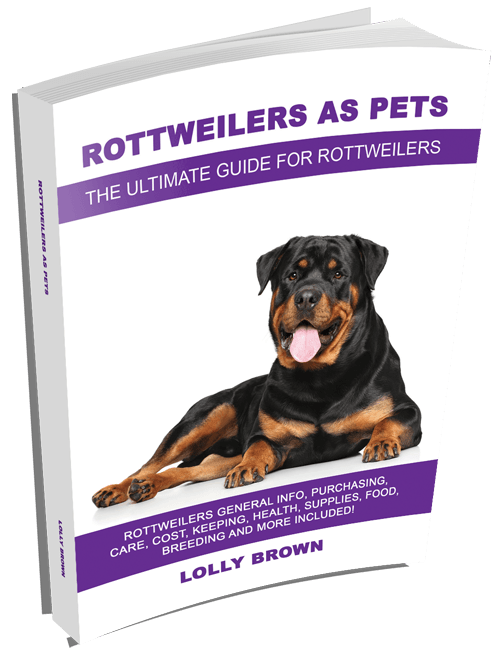