It took many years for experience breeders to develop various colors and patterns in crested geckos. One of the most famous patterns such as dalmatian spots, pinstripe patterns and tiger crested geckos that are now seen in multiple generations. These traits in captive breeds are mostly taken from crested geckos in the wild and we’re refined overtime. Polymorphism or commonly known as ‘morphs’ refers to the presence of the multiple colors/patterns of a species. It also refers to the phenotype (or the observable characteristic) of an animal breed.

When it comes to crested geckos their morph characteristics are usually inherited as what you’re going to learn about in dalmatian spots, pinstripe patterns, and harlequin crested geckos. Get to learn the different variety of colors and patterns as well as the basic genetics of crested geckos in this chapter.

Morphs and Patterns of Crested Gecko

Crested geckos are polymorphic species. This section will cover the different types of morphs and traits in crested geckos.

There are also some crested geckos that don’t have a pattern, and only possess a solid color. Solid – colors include the following:

Usually solid – colored crested geckos are what breeders use when breeding colored geckos as they can be used as establish lines. Do take note however, that there’s no crested gecko with a full black or white color, they usually come in shades of yellow, red, cream and other existing colors. There are also the so – called bicolor crested geckos that also don’t possess any sort of patterns. Bicolor geckos are usually darkish in color or sometimes a lighter color especially at their heads.

Harlequins are crested geckos with high flame patterns. These geckos usually have a base color of either red or near – black with yellow, cream or orange. They also possess this pattern in their limbs. Extreme harlequins are white/ cream patterned crested geckos wherein their body pattern breaks into a sort of creamy dorsal area.

Pinstripe pattern is a single and independent characteristic compared to a morph wherein there’s a group of traits or specific patterns like flames, harlequin, or tiger. A classic pinstripe usually consists of cream – colored scales with the rest of its back being covered with a flame pattern or a solid cream. A full pinstripe is more desirable compared to a partial pinstripe. Crested geckos that possess pinstripe patterns are usually flames or harlequin but it can also be found in tiger patterned crested geckos.

Dalmatian spots in crested geckos are also considered as an independent trait just like pinstripe pattern. Spots can be found in various colors and sizes of crested gecko. Black spots are usually the most common type along with red, white and green spots. Super dalmatian pattern refers to crested geckos with large spots and/ or many spots. Your crested gecko should have at least 100 spots in its body to be qualified as a ‘super dalmatian.

White spots among captive breeds had been very common since the early days. It appears as tiny white spots and is usually seen in the gecko’s toes, belly, nose, and chest area. However, it can also just be a result of unfinished pigmentation and not something of a genetic trait.

Crested geckos can have pigments ranging from very pale to very near – black colors; and from buckskin/ olive colors to red or yellow. Obviously, vibrant color is much more desirable because of its appealing and high contrasts. Extreme light and dark colors are also popular among reptile hobbyists. Crested geckos don’t have a blue color/ pattern and this is probably because they lack pigmentation to produce that kind of effect. A blue, purple or even green solid colored crested gecko are highly unlikely. The closest color is olive and sometimes lavender which pretty much a slate grey colored gecko is. 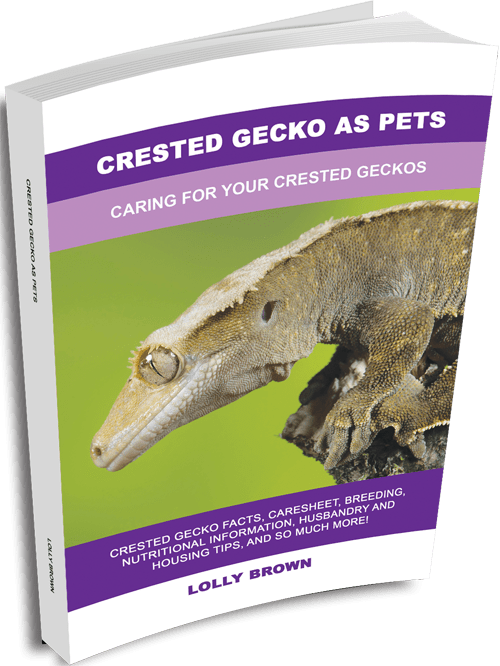