► Chapter One: Get to Know the Columbian Red – Tail Boa!

► Chapter Three: Questions to Ponder Before Purchasing a Columbian Boa

This chapter will focus on the anatomy of a Columbian Red – tail boa so that you can better understand its nature. Part of keeping these kinds of creatures is to know their physical capabilities because it’ll come in handy whenever you’re performing other keeping duties such as feeding, shedding, handling, and overall husbandry. You’ll get to know how they use their body parts and the special features they have that can’t be found in other snake species.

Anatomy of a Boa Species

Columbian Red – Tail boas belong in the family of Boidae (consists of boa and python species). Boa constrictors are Ectothermic or cold – blooded animals, this means that snakes aren’t capable of producing their own heat which is why your pet red – tail boa will try to grab some heat from its enclosure and from you! The heat that they’ll acquire from humans or their environment will help them in digesting their food and also ensures good health. They gather heat from the sun, rocks, artificial heat sources (ceramic heat emitters, heat lights, or heat pads), and human handling.

Columbian red – tails have 2 lungs; the left and the right. Both of their lungs remain functional compared to other snake species from another family that only retained one lung (usually the right side). Both lungs are functional for all species under the python and boa family.

Most boa snake species have smooth scales or skin. In fact, the scales are made out of hard folds of skin. The scales of your Columbian red – tail allows him/ her to get a grip on surfaces whenever they climb or crawl on something. One of the best features of a Columbian boa is its soft skin which is why they are not icky to handle unlike other snake species. It would feel like a soft leather in your skin. The scale patterns have a variety of colors, so pick the one you prefer.

The vertebrae of a boa species comprises about hundreds of backbone, each of which has a pair that’s attached to its ribs. Each of the backbone controls one ventral scale. The movement of your pet Columbian red – tail is done by using their ribs. Their vertebrae are very extremely strong and agile which is why some of them can straighten their bodies in the air with no sweat.

One of the most fascinating features of any snake species for this matter is their head. With boa species, the shape and color of their heads are quite interesting compared to other common snake species. The patterns are unique and it blends very well in the environment they live in. Some has strips on their head while some has other pattern that morphs into various coloring. Some keepers like them because of their addicting appeal especially the head patterns.

The eyes of a common boa are usually matched to the color or pattern of their head. The stripe  pattern might continue to their eyes. It’s also important to note that boa species don’t have any eyelids that can be closed. Their eyes are protected by an ocular scale or an eye cap that’s clear in color. The ocular caps are usually shed during shedding period. This eye caps dilate in the presence or even in the absence of light. You might notice that their pupils can be slit or wide open depending on the amount of light.

As you know, all snake species don’t possess any external ears. In fact, most boas are completely deaf which means that they can’t hear any sounds BUT they can sense vibrations, and pick up low frequencies through their inner ear. This is why; you shouldn’t place your pet near vibrating objects or put things like refrigerators, stereo speakers, and electric fans among others on or below their enclosure. A state of constant vibration will make your pet very stressful.

Columbian red – tail boas is quite adapted to eating preys that are larger than the size of their mouth. The lower jaw of your pet is not connected to their skull unlike in other animal species or in humans. This means that they can freely open their lower jaw to eat their prey. The muscles and ligaments of their lower jaw allow it to expand and go back to normal. Using this ability, they can open their mouth that’s enough to swallow animals that has larger heads than them. The larger the boa, the larger the ability to extend their lower jaw; it also allows them to do a ratchet motion in order to pull their prey inside their mouths. 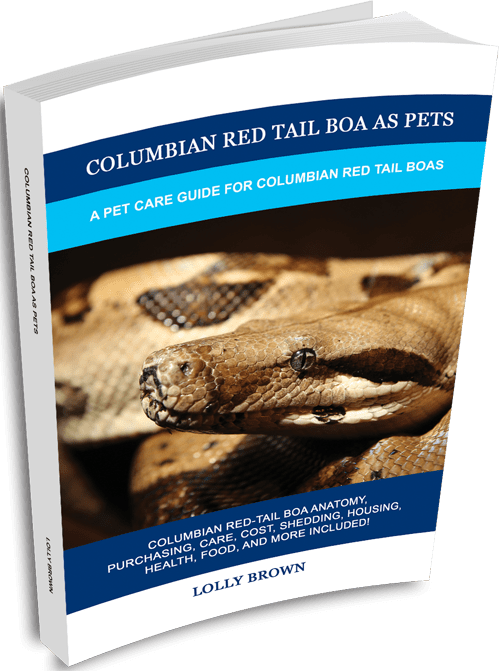