► Chapter One: Bloodhound as Pets

► Chapter Three: Is Bloodhound the Right Breed for You?

► Chapter Seven: Caring and Protection for Your Bloodhounds

Chapter One: Bloodhound as Pets

The American Kennel Club describes the bloodhound breed as dignified, noble and a dog that exhibits wisdom, power and solemnity. Even though he is an easy going and gentle breed that’s also sometimes quite bumbling, bloodhounds are not the lazy type of dog that you often see on TV. This large breed requires lots of space and safe areas to play around and ramble every day. It is mandatory that he is secured on a leash, or in a fence (if he is free to roam around the house) and that is because his nose just locks on to any fascinating scent that he can smell.

Once that happens, this dog’s ears are turn off and it’s quite impossible to get his attention back since they – or perhaps their nose, just can’t resist the scent to the point that they will trail it for many miles until they get hit by a car.

Bloodhounds are generally gregarious and good – natured especially with people and other breeds but there are still some individuals that can’t simply get along with other dogs and can also be aggressive to species of the same – sex.

The great strength and stubbornness of this dog breed requires a confident keeper who knows how to enforce rules in a more assertive yet not harsh manner. It’s important to know that even if this breed is kind and sensitive they also have their “bad side” so you don’t want to disrespect them or treat them harshly if you don’t want them to become an aggressive or over – the – top stubborn as a pet.

Bloodhounds are mature in a slower rate which is why your firmness and patience should be extended over many years even if they are already an adult. This breed’s tendency to chew and swallow anything that he could fit inside his mouth may at some point send you to the vet so make sure to dog – proof your house. There are also some bloodhounds that are quite possessive when it comes to toys and food which could be a potential problem if you have other pets or young children in the house.

If you want to keep a dog that is large, powerful, rugged, and with “houndy” features – long hanging ears and loose skin then this is the right one for you. Bloodhounds also have a short and easy – care coat. They thrive on vigorous activities and enjoy the great outdoors, and they have that solemn and kind yet dignified expression.

On the other hand, if you don’t want to deal with a large dog that can take up a lot of space in your car or house, if you don’t want to have a dog that jumps a lot and quite rowdy especially when young and if you don’t want to have a pet that can be destructive when bored then the bloodhound breed may not be for you. They can get shy towards strangers especially when they are not socialized enough and they can be quite difficult to housebreak. They can also be potentially aggressive toward other animals, they are independent and have a mind of their own which is why they require an owner that is confident and can take charge. Bloodhounds also tend to drool and slobber a lot, has that distinctive “houndy” scent, loud baying and a short lifespan.

You can avoid some of the breed’s negative traits by selecting an adult dog from a rescue group or an animal shelter. With an adult bloodhound, you can easily see the personality and temperament of the dog you are getting because they already have proven themselves that they don’t have negative characteristics. On the other hand if you want a puppy, you can avoid some of these negative characteristics by getting it from a reputable source and selecting the right puppy from the litter. Unfortunately, you can never tell whether the puppy will grow up to be a well – mannered dog or even a healthy one because it is possible to inherit health issues and temperament from the parent breeds.

Here are some things that you should be concerned about if you want to acquire a bloodhound:

You need to always provide your pet with enough physical and mental stimulation.

Keep in mind that bloodhounds are rugged and large hound dogs that need enough opportunities to play and run in a spacious and enclosed area. Otherwise they can become bored and rambunctious which they usually express through loud baying and also destructive chewing. Bored bloodhounds can definitely turn your backyard and house upside – down in just a matter of minutes! We highly recommend that you as a potential bloodhound owners sign up your dogs to a local tracking club so that you can be sure that your bloodhound always get involved in potentially lifesaving activity. You see, bloodhounds were never intended to be ordinary household pets.

Keep in mind that they are working and hunting dogs which means that they have a tendency to trail scents, explore, bay and pretty much chase anything that moves, and these things can be a nuisance in a normal household setting. Trying to suppress such hardwired inclinations without providing alternative outlets for the bloodhound’s energy is quite impossible and also unfair to the breed. 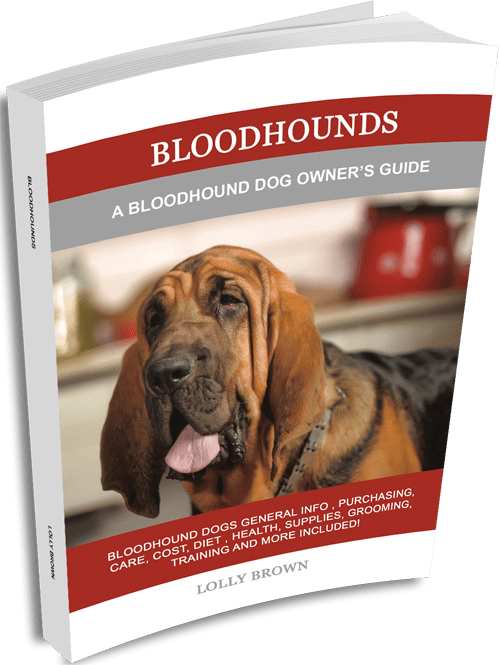