► Chapter One: All About the Unique African Serval Cats

► Chapter Two: Caring for an African Serval Cat as a Pet

► Chapter Three: Risks of Having African Serval Cats as Pets

► Chapter Six: Conservation: The Hunter is Being Hunted

► Chapter Seven: Serval Cat for a Pet? Why Not?

Chapter One: All About the Unique African Serval Cats

The name of the African serval cat is taken from the Portuguese word cervus which means deer; that is the serval cat is a “deerlike wolf”. In Africa, where the servals are unique to, they are commonly called “bush cats”. In the African language, Afrikaans, these incredible cats are called tierboskat or tiger bush cat.

This lean-built cat stands about 20 inches at the shoulders. The body of the African serval cat is slim and its legs are quite long for the size of its body. The legs can be up to 3 feet long! The African serval cat’s legs are considered the longest among all the wild cats in terms of proportion to the body. The African serval cat sports a short tail that has a black tip and about six to seven black rings. The tail is only a third of the whole body length of the serval. Its coat pattern varies, but the most common coat color is pale yellow covered with spots of different sizes. Often the spots merge together and form into vertical stripes along the serval cat’s neck and back. The underbelly of this cat is a similar pale color as its coat, only lighter than its coat and also has spots. Some servals have coats that are golden brown or black in color, and they also sport spots or stripes through their dark coat.

African serval cats produce a variety of vocalizations including growling, snarling, purring, and spitting. They can also give out a high-pitched cry when they want to call the attention of other servals. An African serval cat will arch its back and growl loudly when there is the need to defend itself. They are wary of leopards, hyenas and wild dogs that can chase and eat them. But they can escape these predators by running very fast and climbing tall trees.

African serval cats can live in the wild up to 11 years and up to 20 years in captivity.

The social interaction of the male and female serval cats are not long—it only happens seasonally when breeding and during short periods of traveling and resting together. During seasons when female servals are in heat, their social interaction with males is much longer and more frequent. Female serval cats can produce litters of 3 to 4 throughout the year. The serval kittens are born among underbrush or in thick grass covers. Usually, female servals give birth during the end of summer, and the gestation period is from 65 to 77 days. Within 9 to 12 days, the eyes of the kitten will open and after three weeks, they are ready for solid food. It is interesting to note that the mother serval will raise its young, called kittens, by herself, going away frequently to hunt for food. The father does not have any active parenting role. When the male serval cubs are old enough to hunt by themselves, usually at 6 to 8 months, the mother will drive them away from the lair.

The female cubs will stay with their mothers until they grow old enough to be sexually mature. It is only at this time they will leave their homes—forced out is more like it—and set up their own territories. They mark their territories with scent from feces and urine and usually, the serval homes range from 15 to 25 square meters wherein the other serval cats try to avoid contact. While both genders of serval cats mark their territories, males do so more frequently than females and spray their area about 45 times in an hour! Females only do so with half as much time. 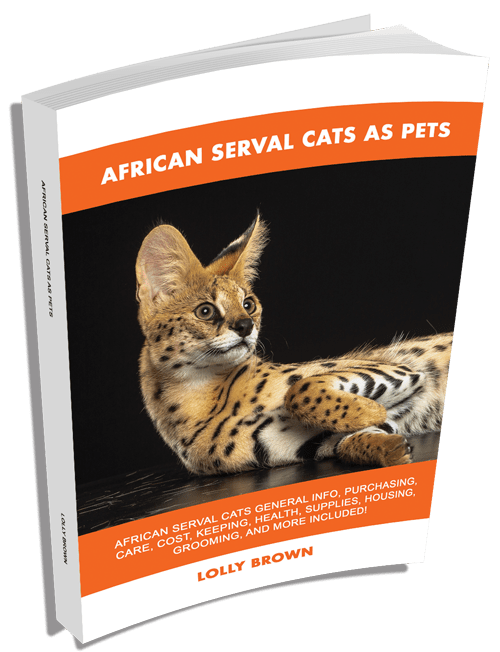